Of the many open areas around Kingston, one well worth a visit is the Cook Natural Area (also known as the Cook Preserve). Just to the east of Kingston, it is a place of unique interest. It was created by Deed of Gift from Grace Cook to the State of New Jersey in the 1970s. By the terms of the Deed, the Preserve is to be "maintained to promote the enjoyment of natural things including trees, birds, wildlife and water; to educate the public as to the importance of ecology to all life including man's; and to nurture plants and animals for agricultural, horticultural, scientific and recreational purposes." The intent of the gift was to maintain the sense of the old farmland and the bucolic delight of its scenery.

To this end, the Preserve consists of two sections: 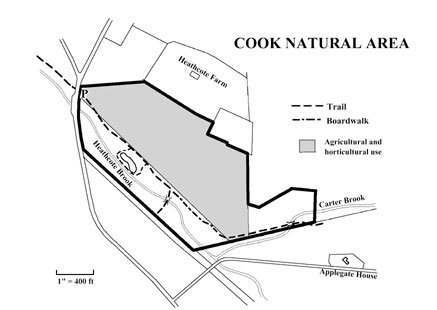 The Preserve is contained in the oldest farmland that was established in the district. It is elegantly overlooked by the massive stone Heathcote Farm building, built in 1857, which was initially intended as a State juvenile detention center but later completed as a private residence. (At the time of its abandonment by the State it had consumed a majority of the total State funds for the year!). Heathcote Brook is crossed, in the middle of the Natural Area, by a picturesque old stone bridge, which was re-erected at its present site around 1937. It was originally built to carry Ridge Road over Heathcote Brook, perhaps in 1865.

There is a variety of routes to walk in the area: around the perimeter of the fields; across the bridge and onwards along the D & R Canal Linear Park; or up Carter Brook to the Holsten farm land, now preserved as open space thanks to a County purchase. A short trail circumnavigates a pond in the woods.

All these walks have their special delights, in particular a sense of being in the country, in the fields or by the edge of the stream. An exceptional feature of the Preserve is the profusion of flowers that can be found. Both the glacial deposit soil and the wetland region contribute to this: in spring the immediately evident ones include Spring Beauties, Trout Lilies, Violets, and May Apples. In fall an equally wide variety blooms. A recent September walk rapidly revealed 14 flowering species, all elegantly ornamental, having endearing names such as Heal-all, Spotted Joe Pye Weed, Touch-me-not, Boneset, Late Purple Aster, Sweet Everlasting, Mild Water-pepper and of course Purple Loosestrife.

In winter the Preserve again has its own special beauty, with snow-covered fields and ice patterns in the brook. It is ideal for cross-country skiing, along the walking trails or across the open fields.

You will certainly find an expedition to explore the Preserve to be rewarding. Be aware that some parts of the trails may be muddy after rain. There is a wooden bridge over Carter Brook and a boardwalk across the swampy area leading to it, both constructed by Eagle Scouts. A trail (the "Heathcote Trail") also leads to the Preserve from Kingston Lock. It is now possible to walk or bicycle comfortably from the Kingston lock, over the old stone bridge and on to Heathcote Park. This whole section forms part of the "Freedom Trail".

Parking is at the junction of Ridge Road and Heathcote Road.

Administration of the Preserve is by the Delaware and Raritan Canal State Park, Superintendent, Patricia Kallesser. The Park is part of the Division of Parks and Forestry, of the Department of Environmental Protection of New Jersey.

The Preserve is part of the Kingston Green Belt. It is continuous with Heathcote Meadows on the west and the Mapleton Preserve on the east. 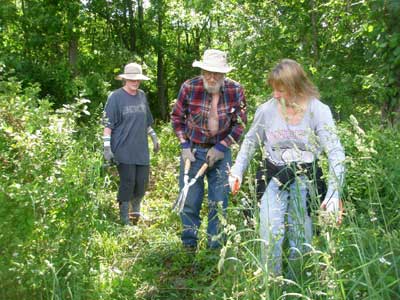 We celebrated Trails Day by opening up a new trail in the Cook Natural Area. This is a drier path that replaces the trail that was formerly the site of the boardwalk, which became impossible to maintain because of wetness and aggressive vegetation. The new trail starts off a few hundred feet in from the Cook Area parking lot at the intersection of Ridge and Heathcote Roads. It first leads through a short wooded section, then crosses a field, passes through another shaded segment, and emerges to a path that skirts the trees along the upland edge of a large field. Some sections of the old boardwalk were reused to good purpose. 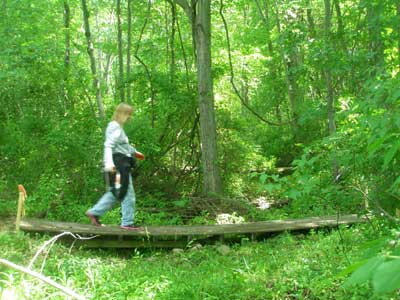 Our volunteer crew was spectacular! They cheerfully cleared trees and brush, dug postholes for the trail markers, dragged sixteen-foot, HEAVY boardwalk sections to their new locations, and one volunteer singlehandedly rescued the stone bridge from an inundation of weeds! 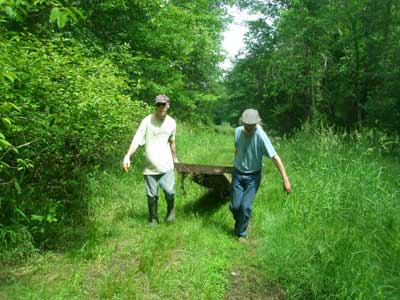 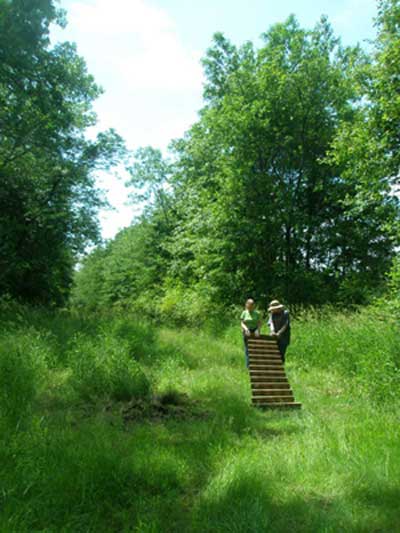 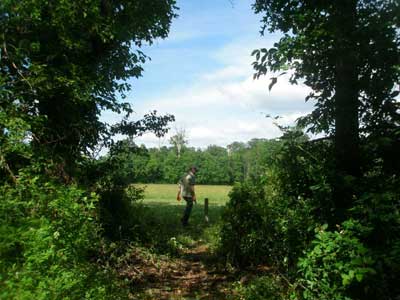 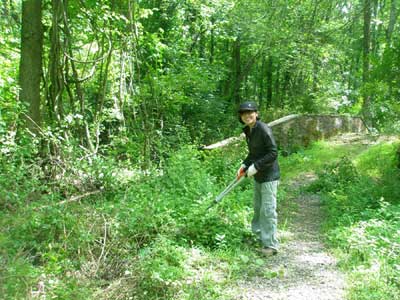 We invite you to walk this new stretch, and when you do, please thank the hard workers who created it! 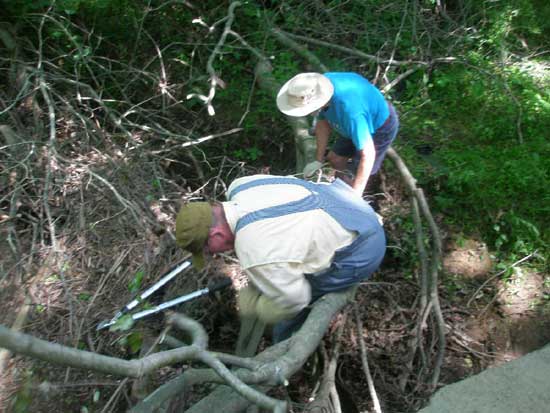 To celebrate National Trails Day, volunteers cleared away a tree and other debris blocking the flow of Heathcote Brook under the old stone bridge in the Cook Natural Area. 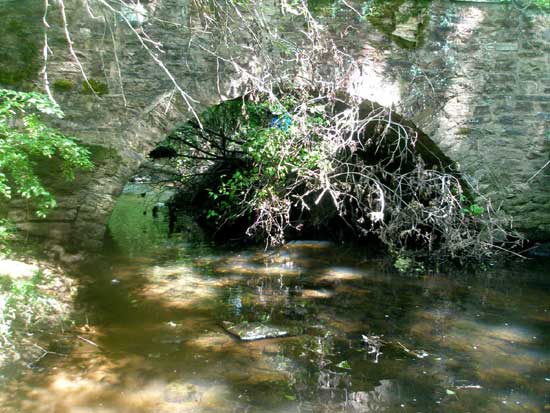 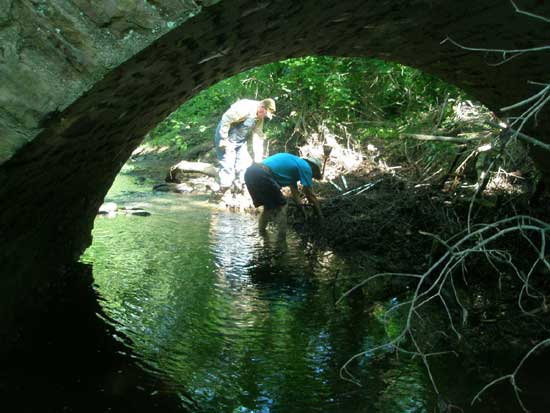 It was a cool way to spend a warm day! Many thanks to our industrious crew. 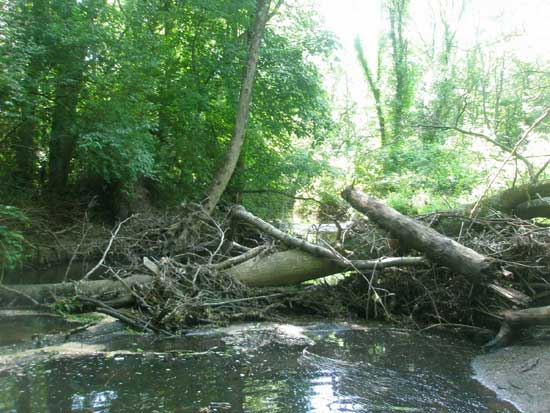 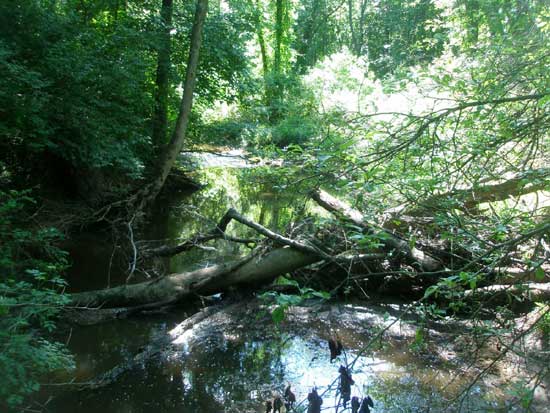 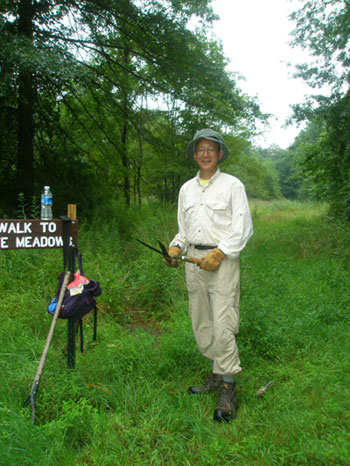 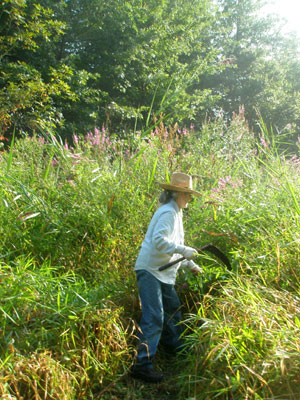 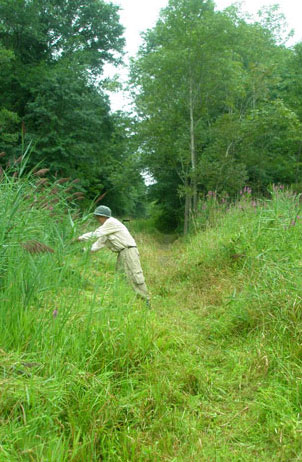 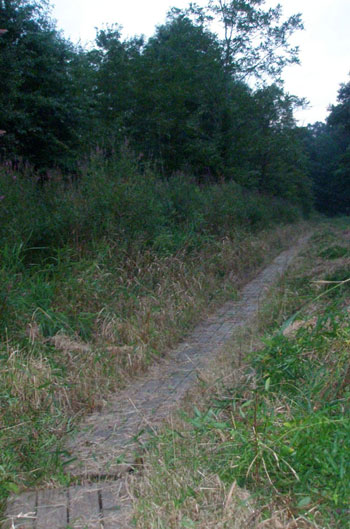 The boardwalk in the Cook Natural Area had become seriously overgrown; parts of it were virtually impassable. Undaunted by the task, Rutgers EnviroSteward Ron Chen volunteered his skills and energy to tackle it. He teamed up with Tari Pantaleo, and after three two-hour sessions and a healthy assist from Rick Lear of the Middlesex County Parks Department, the deed was done from end to end! In the process, it was discovered that some of the walk needs maintenance, and long-term solutions are sought, along with a plan to keep the boardwalk walkable.